Single photons are cool. By generating and detecting single photons new experiments in physical science and quantum mechanics are possible. Great applications like quantum computing and cryptography, medical and biotechnological measurements, as well as environmental monitoring are based on single photons. So we need to build a DIY Open Source Single Photon Generator and Detector for everyone to play with. There seem to be different aproaches on how to generate single photons. By fluorescent suspended ions, quantum nano-dots or through non linear crystals (BBO crystal or KDP crystal). The later uses so called Spontaneous Parametric Down-Conversion (SPDC) and will create two entangled photons simultaneously (if the frequencies are right).

Photon Multiplier Tube (PMT), the classic way, a glass tube with several stages that when supplied with high voltage will multiply electrons generated by the incident photon. These tubes are available for quite cheap on internet or even full luminometers with photon multiplier tubes can be found.

Charged Coupled Device (CCD) with low noise when cooled down are the classic way to get a very low light and reproducable image. These are used in special microscopes and ofter super expensive.

Electron Multiplying CCD (EMCCD) combine the multiplying effect of the multiplier tube with the CCD sensor. And thus are even more expensive.

sCMOS – CMOS (Complementary Metal Oxide Semiconductor) chips replaced CCD in consumer and even professional photo cameras. With the sCMOS, a scientific grade of CMOS, this technology is now entering the market of scientific imaging and hopefully bringing down the prices.

Then there are two relatively inexpensive and still sensitive semiconductor devices that are interesting for photon detection:

Avalanche photodiodes (APD) are small discrete detectors that exploits the photon-triggered avalanche current of a reverse biased p-n junction to detect the photons. The higher the reverse voltage (80-200 VDC) the bigger the avalanche multiplication (acts like an internal amplification). With a relatively simple circuit providing high voltage at limited current and a high gain, low noise amplifier, these devices are very fast and sensitive photo detectors. The OpenAPD is an open source device for such a circuit.

Single Photon Avalanche Diodes (SPAD), special avalanche photo diodes, which operate above the breakdown voltage in so called Geiger mode. When a photon hits the detector an on going avalanche is triggered that turns the diode “on”. The diode is then reset “off” to be ready for the next photon. Thus these elements create a digital signal (one click per photon, thus the name of Geiger mode I guess). The set and reset of the diode can be achieved with a passive quenching (just a resistor in series). Or with an active avalanche-quenching circuits. The OpenSPAD implements such an active quenching circuits as described in scientific literature.

Every SPAD in SiPM operates in Geiger mode and is coupled with the others by a metal or polysilicon quenching resistor. Although the device works in digital/switching mode, most of SiPM are an analog device because all the microcells are read in parallel, making it possible to generate signals within a dynamic range from a single photon to 1000 photons for a device with just a square-millimeter area. Link.

The design is manly based on the MAX1932, Digitally Controlled, 0.5% Accurate APD Bias Supply, a single OpAmp amplifier and a Arduino Micro to control and read the signals. 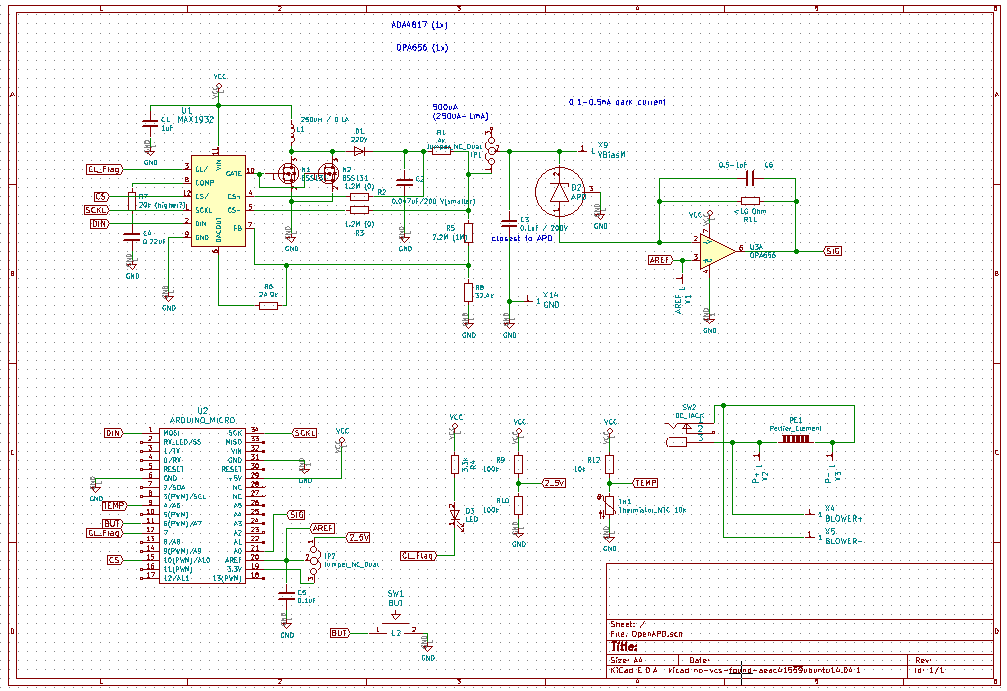 Drive and Amplifier Schematic of the OpenAPD 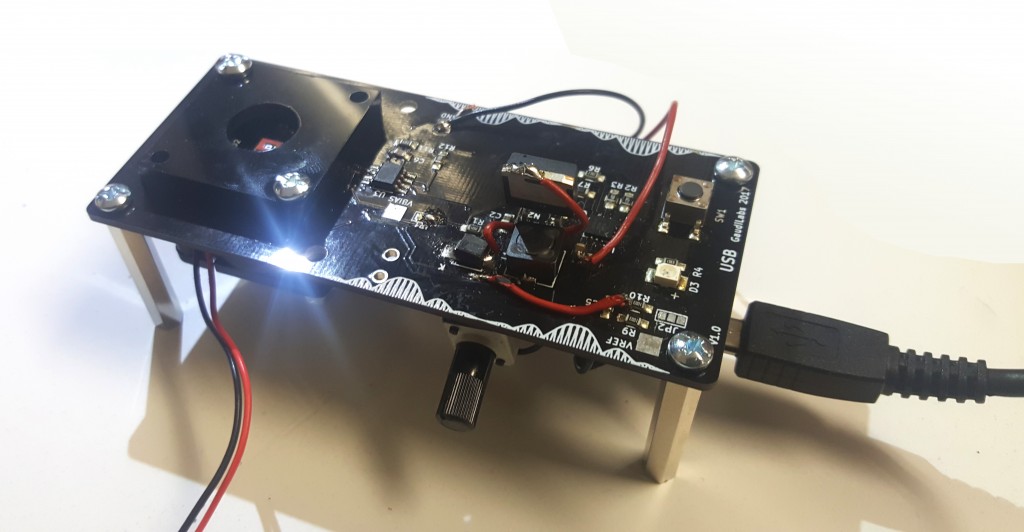 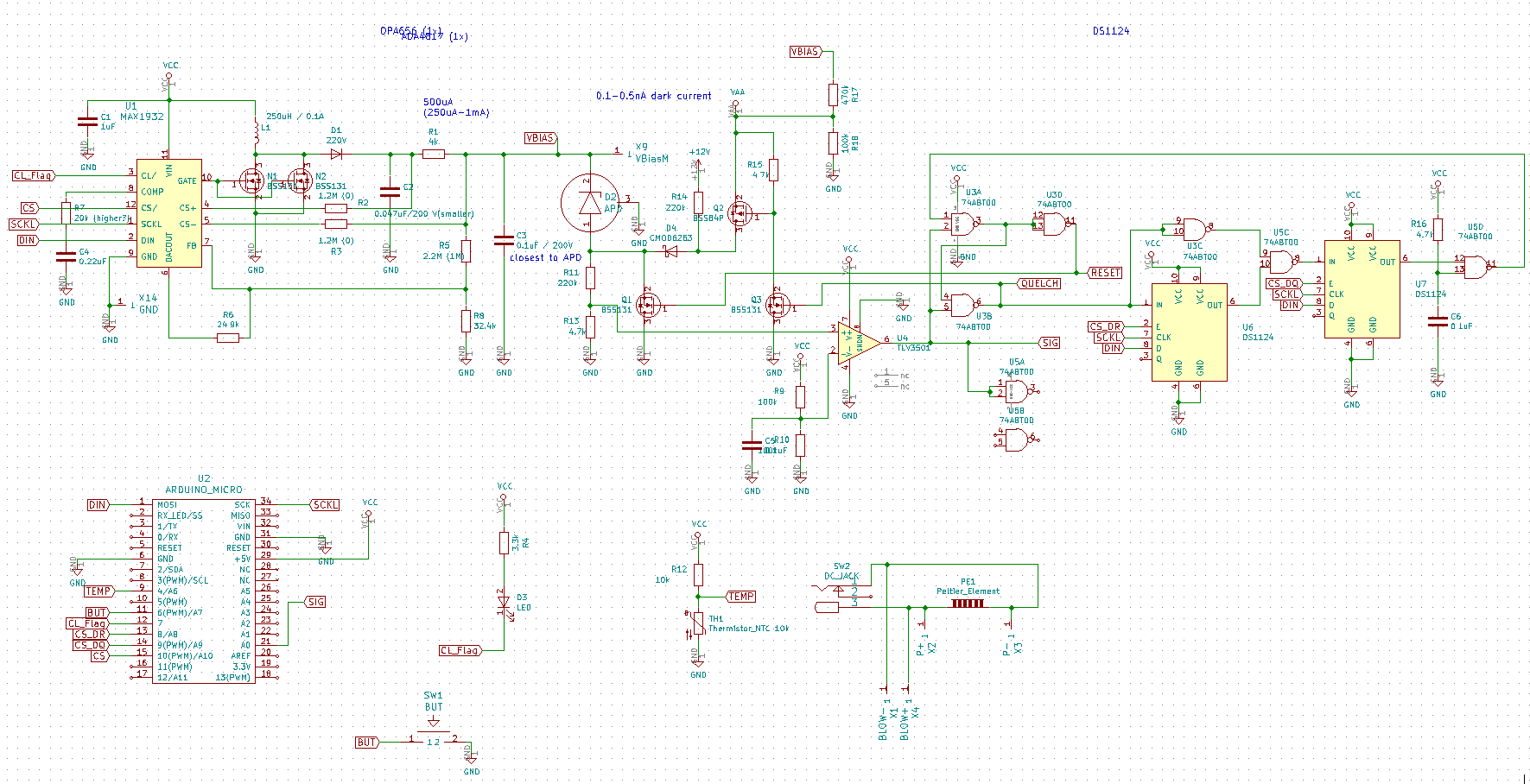 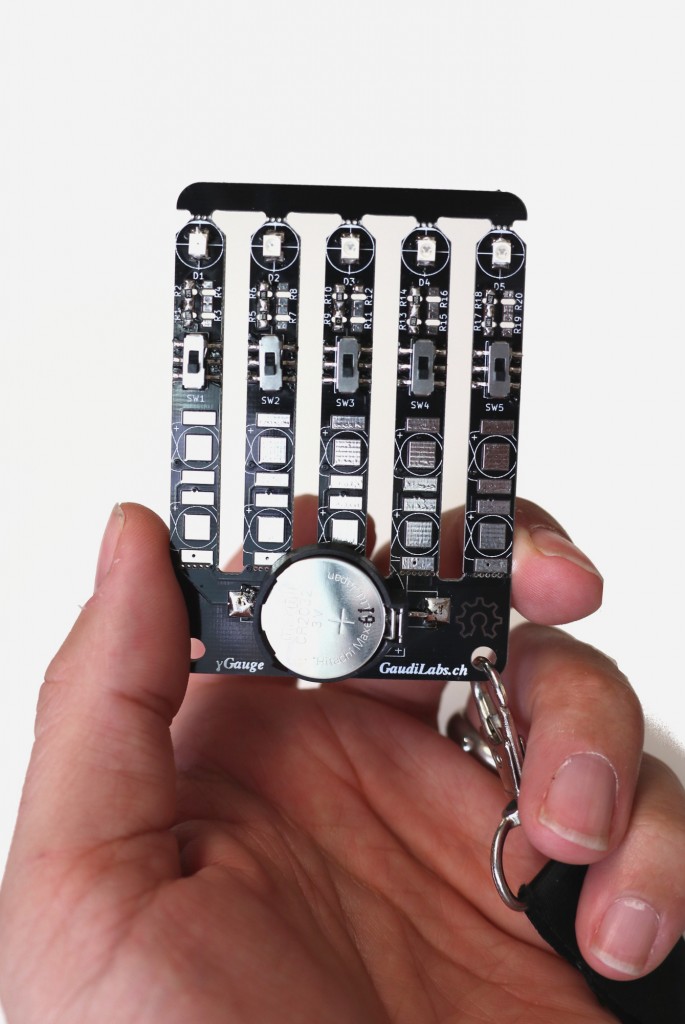 Human eye can apparently detect single photons. (according to the article from NATURE COMMUNICATIONS: “Direct detection of a single photon by humans”)

Spontaneous Parametric Down-Conversion (SPDC):
SPDC is a quantum optical technique in which correlated pairs of photons (called signal and idler) are produced probabilistically from a higher energetic pump photon in a non-linear crystal following energy and momentum conservation.